It's scary season! Prospector is celebrating by sharing some of our favorite spooky minerals and metals from the team! Which is your favorite?

The earth is made up of several varieties of rocks and minerals, many of which are mined for their natural resources. Minerals aren't all gold and silver though, some of these stones have a bit more sinister uses! Let's take a look at some malicious minerals and learn a bit more about them!

1. Chalcanthite - This mineral may look pretty, but its water solubility can make its toxicity easily absorbed by plants and animals. General rule of thumb - don't lick the blue rocks. 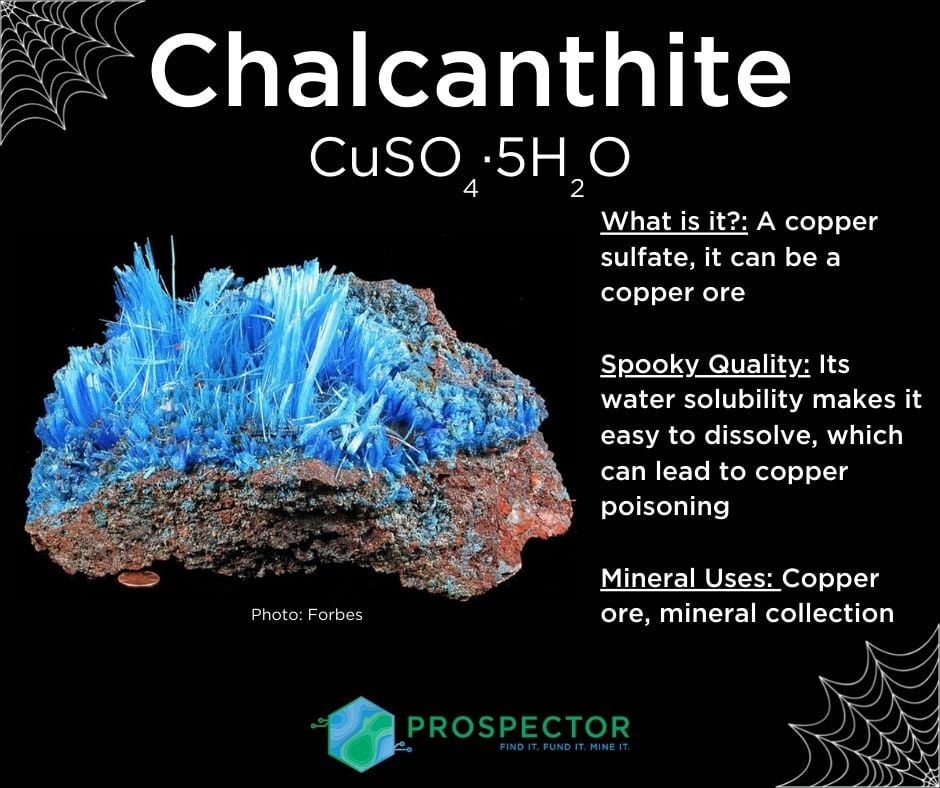 2. Parisite - This rare mineral may sound scary, but it is actually named for J.J. Paris, it's discoverer. It was originally found in the Muzo emerald mine in Colombia, but varieties are also found in Sweden and Colorado. 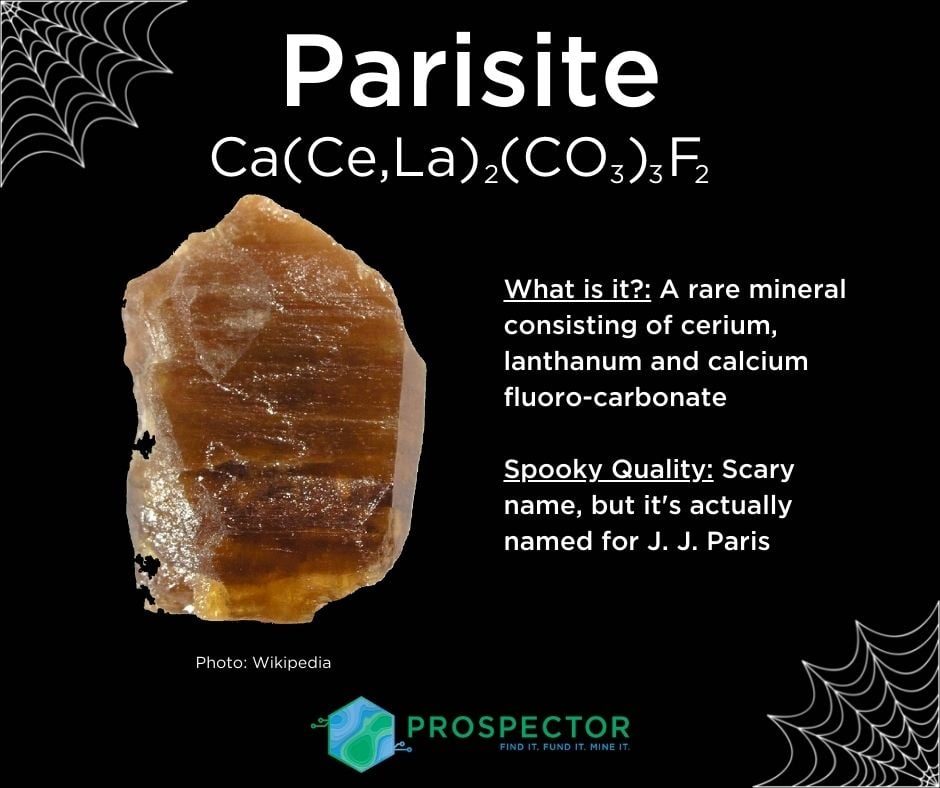 3. Corundum - Most people know corundum as its gem varieties of rubies and sapphires. This mineral tends to have varying fluorescence under UV light. 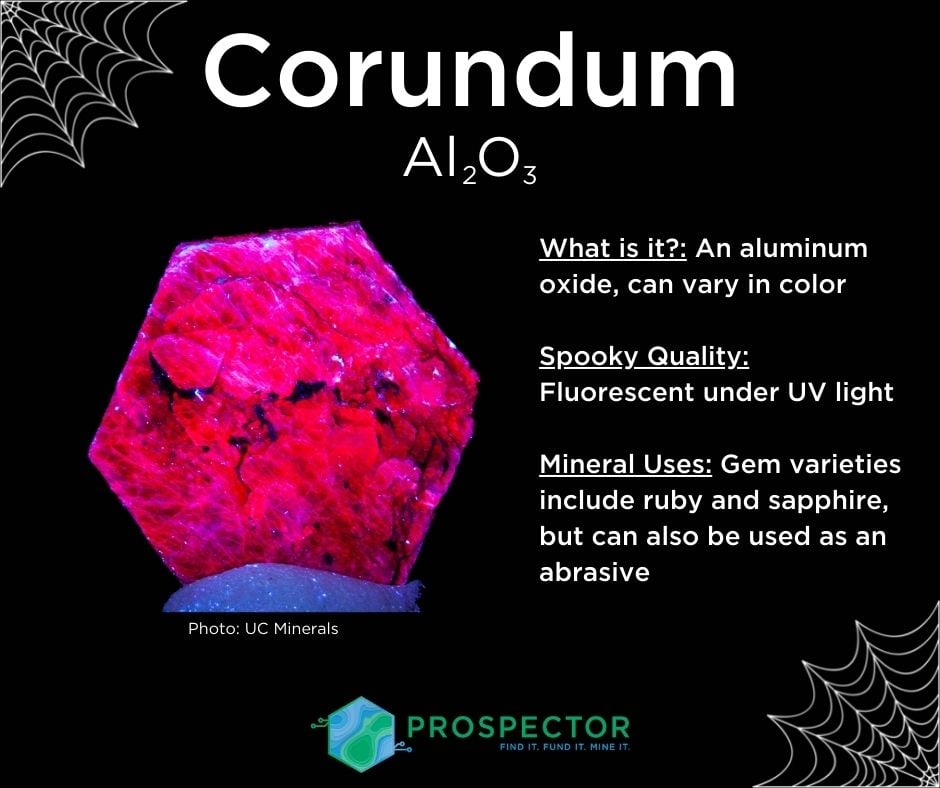 4. Arsenopyrite - this mineral is similar to pyrite (aka Fools Gold), but with one deadly difference: the addition of arsenic to its chemical makeup. Heating this mineral will give off a strong garlic odor, which is a warning sign of a toxic arsenic vapor. 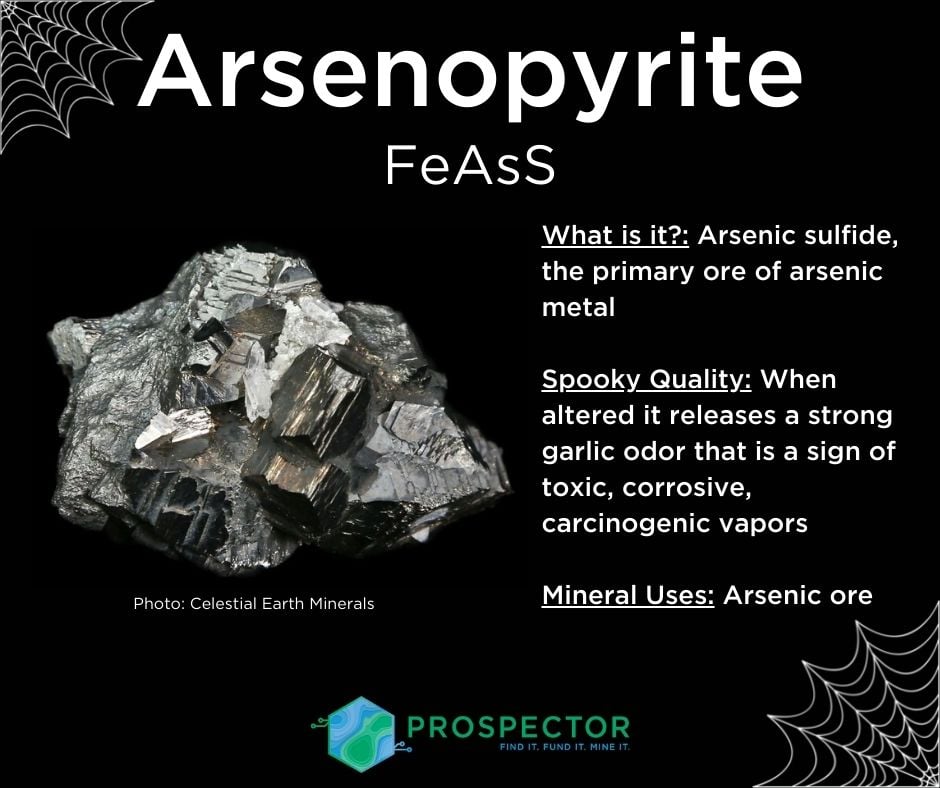 5. Hutchinsonite - This mineral is a mix of thallium, lead, and arsenic. Long term exposure to thallium includes hair loss, sickness, and even death. This mineral is found in mountainous regions of Europe, often in ore deposits. 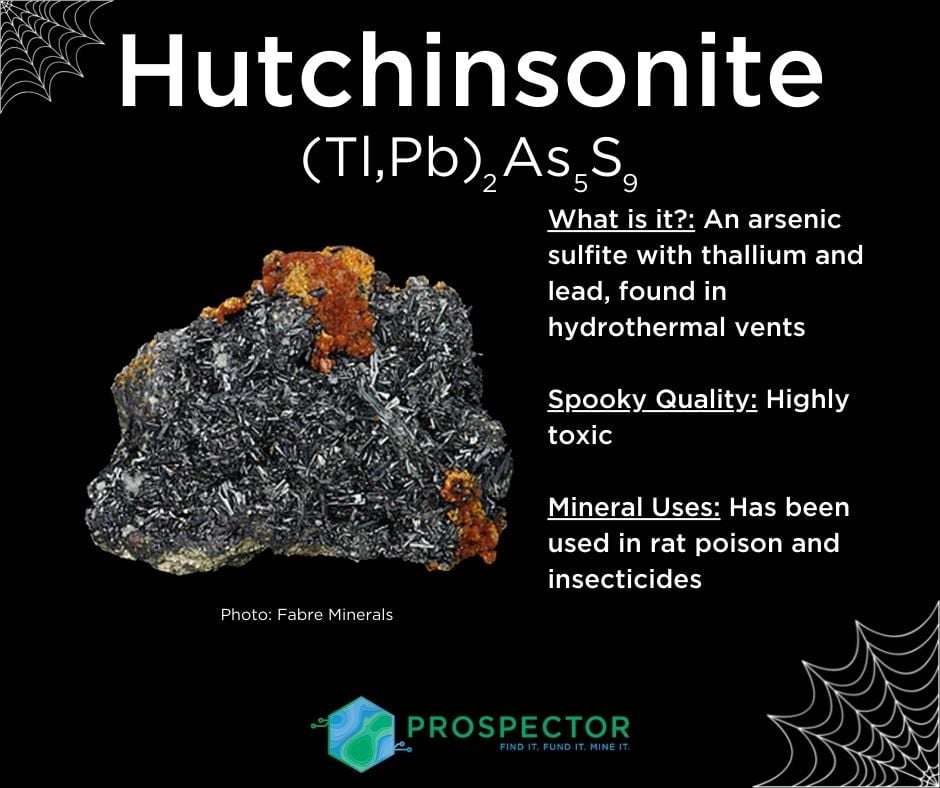 6. Chrysotile - This mineral is the most commonly encountered form of asbestos. The fibrous nature of this mineral allows tiny pieces to become airborne and inhaled, then embedded in the lungs causing scarring. Asbestos was banned in 1989 in most products, including building materials. 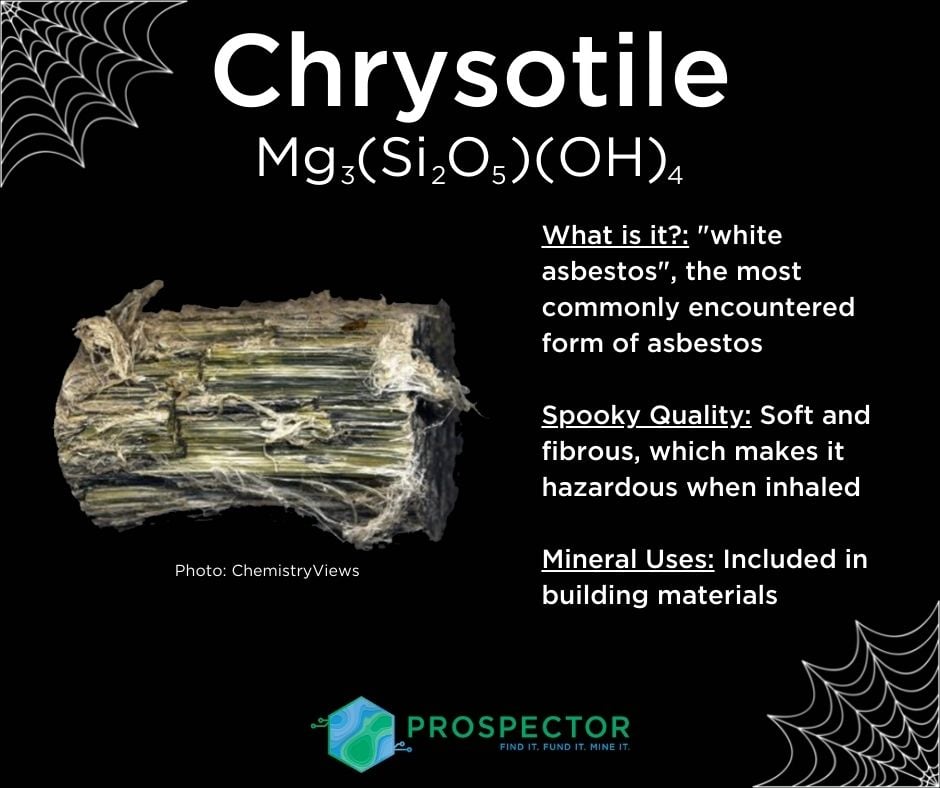 7. Orpiment - This mineral is made up of arsenic and sulfur, making it very chemically reactive. The minerals may look pretty, but holding them may release a deadly powder and garlic smell. Historically this mineral was used on the tips of arrows to poison enemies, but it was also used in ochre paint. 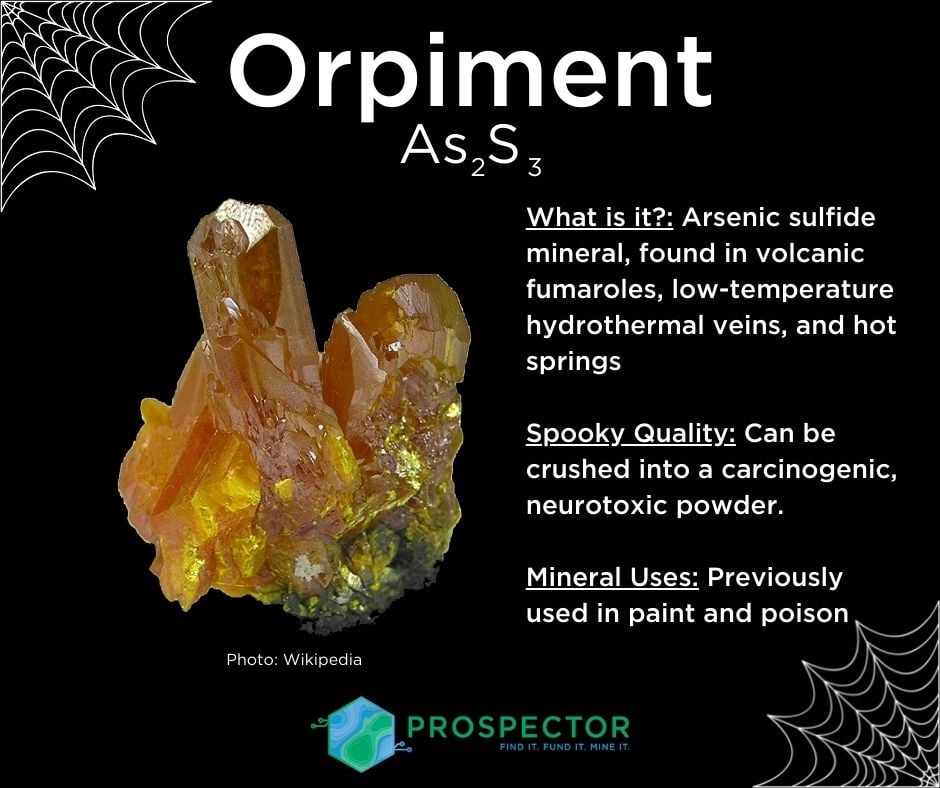 8. Cinnabar - This gorgeous red mineral should be admired, but not touched! It's name means dragon's blood, and it is the main ore for mercury. It can release pure mercury if disturbed or heated, which can cause tremors, loss of sensation, and death. The history of Cinnabar varies, as it was used for decoration and carvings, but also for healing powers by ancient medical practitioners. 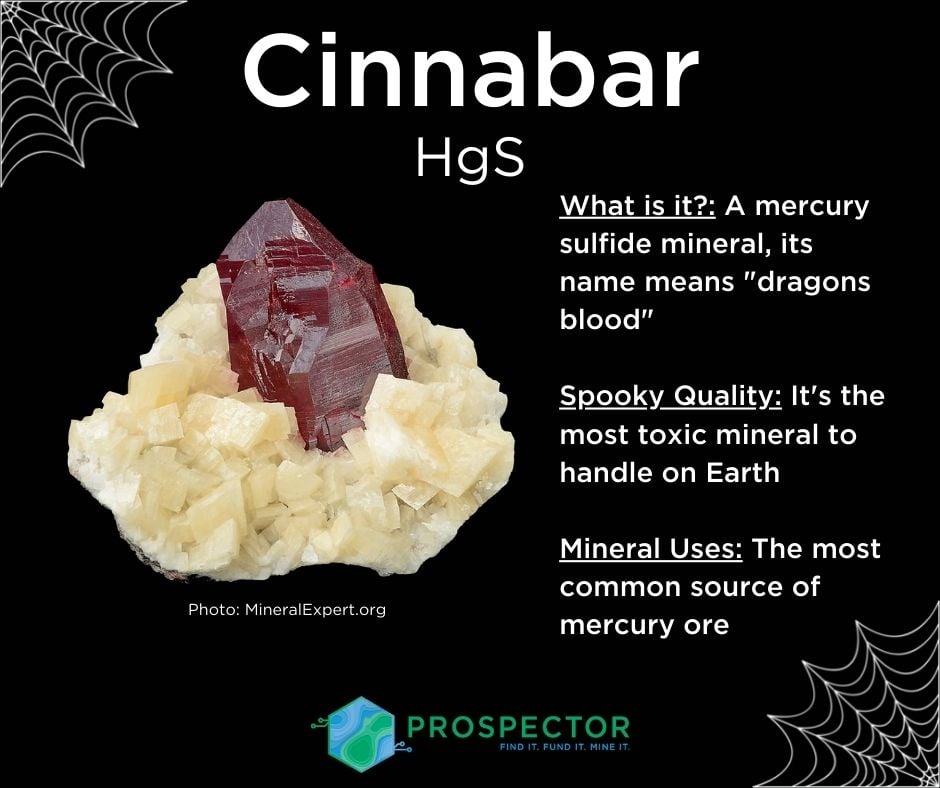 9. Sodalite - This mineral is a tectosilicate with royal blue varieties, and is often used as an ornamental gemstone. While it isn't toxic, it does tend to fluoresce a spooky orange color under UV light! 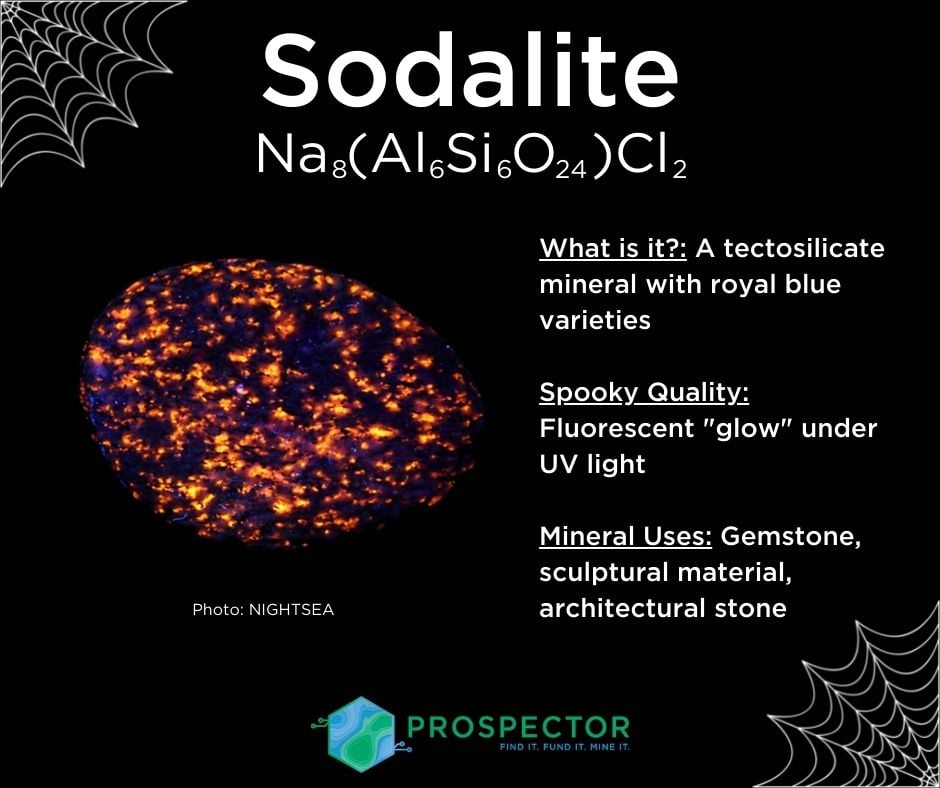 10. Galena - This mineral is an important source of lead and silver and it has a low water solubility. However, weathering of the mineral can release lead chich can cause cardiovascular disease and developmental problems in children. It is also fairly brittle, and cause lead dust exposure. 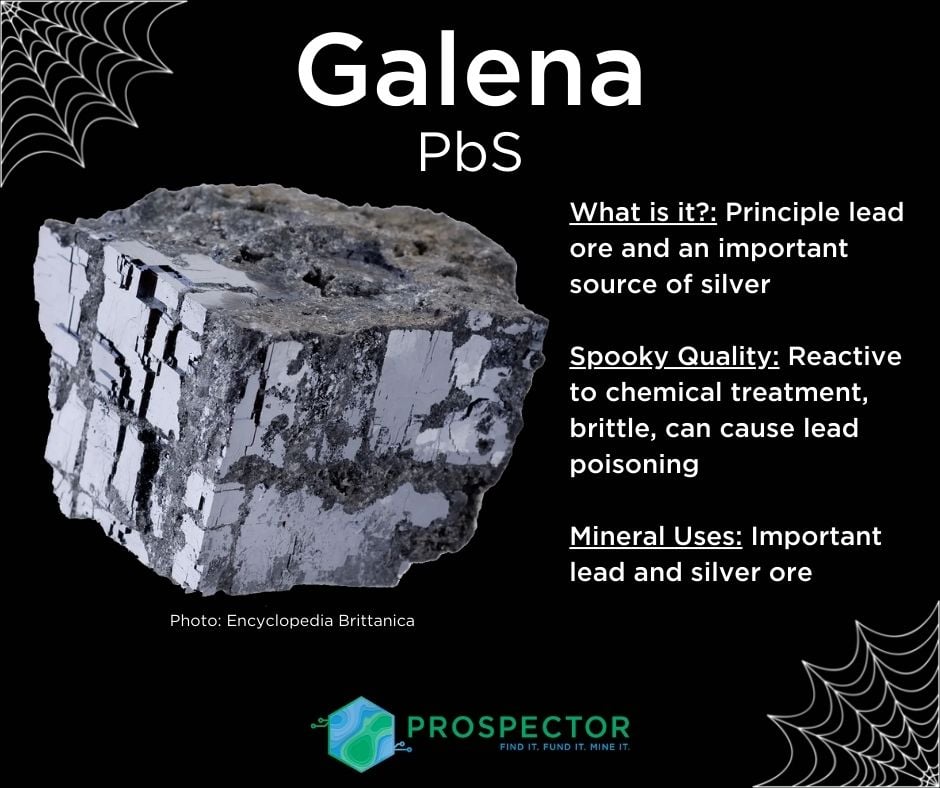 Finding minerals and mines doesn't have to be a scary task! Search and filter with ease right here on Prospector! Looking for a specific mineral? Our new open text search of filings should be your first stop!

In an analyst note sent to investors on Tuesday, May 18, JPMorgan hinted that institutional investors are going back to gold, as the price of Bitcoin...

Join host Emily King and guest Frank Mariage in a discussion on mining investments, mining law, and the most famous mining scandal in history, Bre-X.

OTR Revisited - Mining in the Movies

This week we are revisiting the Mining in the Movies episode of On the Rocks, featuring Tom Albanese! What is your favorite mining movie?