A chart reveals the supply problem of the mining industry, using cobalt as a dramatic example.

The reality of the metals we mine for the energy transition and how they get to markets is making its way into mainstream news, more and more.

The popular New York Times podcast The Daily devoted an entire episode to the competition between the U.S. and China over access to the world’s largest reserves of cobalt in the Democratic Republic of the Congo (DRC).

A simple chart explains why the DRC is such a prize...

Making the Grade and Tonnage

As the world formed, the metals and materials we use were not distributed evenly throughout the Earth's crust. This reality gives certain regions advantages and leaving others dependent on trade to get the materials they need.

This chart from S&P Global reveals why the world depends on the Congo for its cobalt. Plotting countries with cobalt reserves and their grade against one another, the DRC looms heavily over the rest of the worlds reserves, like the Death Star on the horizon of Alderaan. 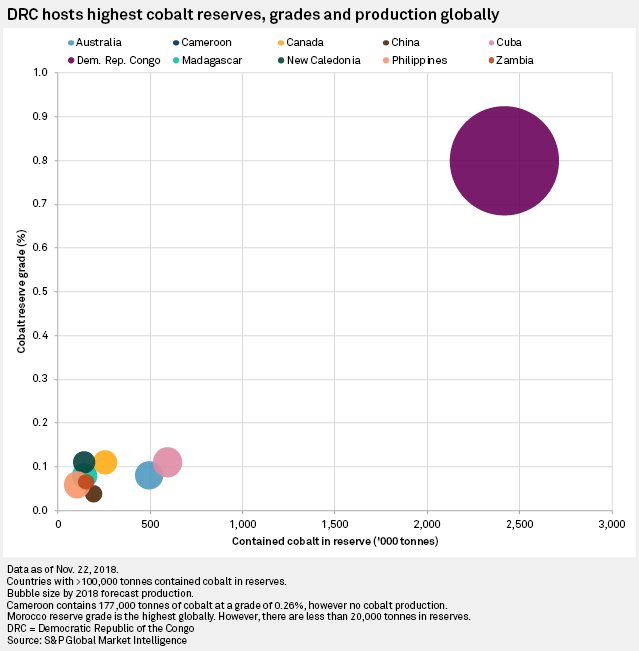 While this chart is from 2018, geological endowment does not quickly change, giving regions persistent advantages in supply chains while other regions catch up by building new mines or new discoveries.

This increasingly valuable resource, especially in the accelerating energy transition is fueling geopolitical tensions and attracting money for more mining, development and exploration brings with it the auspice of further conflict and resource competition.

One way to measure the concentration of an industry is the Hirschmann-Hirdenfield Index (HHI). According to Standard’s & Poors, a reading greater than 0.25 indicates a concentrated market.

In 2009, the cobalt HHI stood at approximately 0.25 and, in the following years, rose to approximately 0.38 in 2017.  This concentration creates problems for nations that rely on cobalt for their military or for their economy. 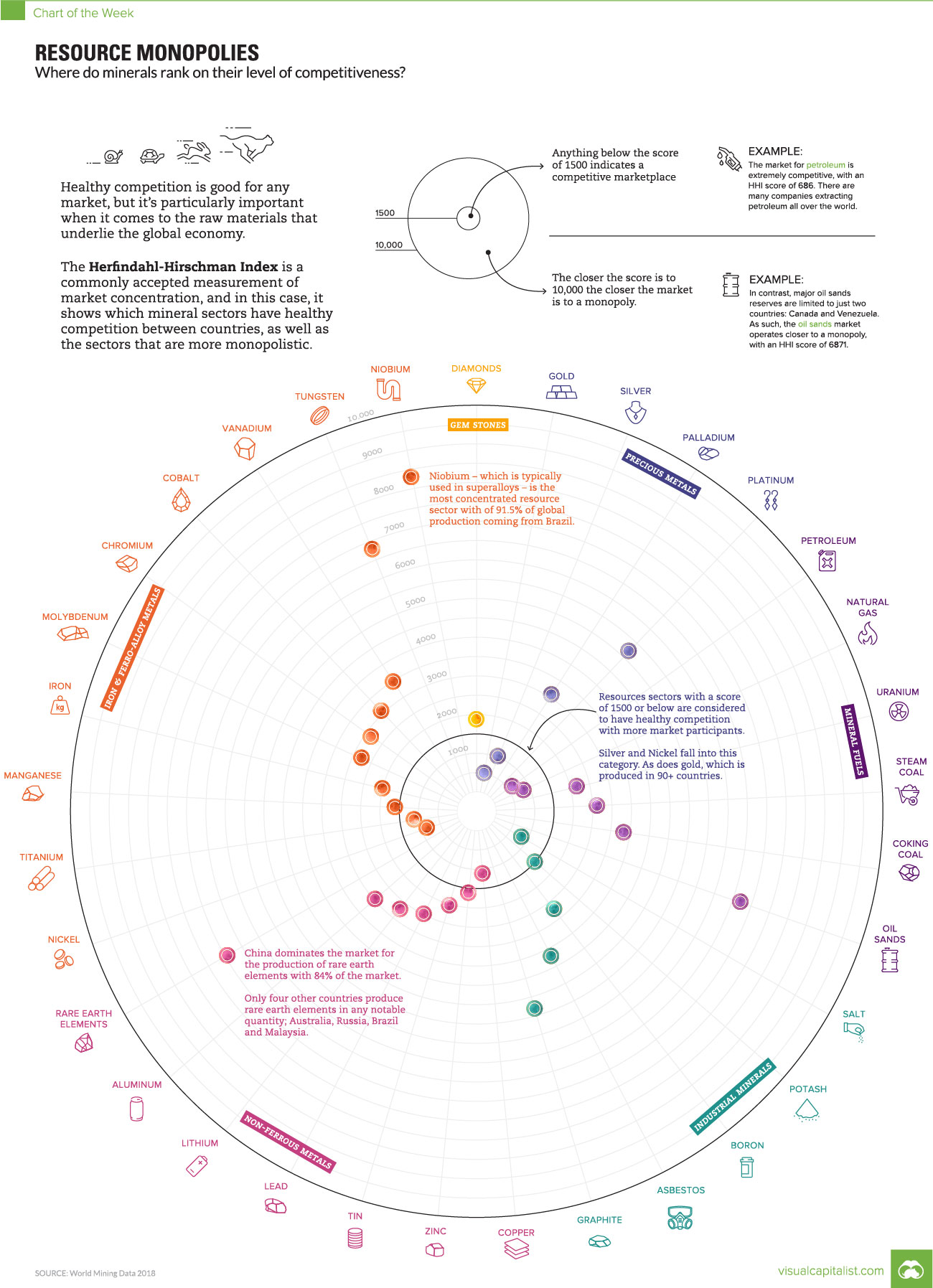 The concentration of metals and minerals creates global competition and supply chain dependency that can pose national security risks.

In 2010, WikiLeaks released a diplomatic cable which mentioned a cobalt mine in the DRC critical to U.S. national security.  The cable revealed that the U.S. Department of Homeland Security considered this mine so critical that its “incapacitation or destruction … would have a debilitating impact” on U.S. security and the national economy.

That’s because in 2010 the U.S. was the world’s largest consumer of cobalt, but it mined none of it. Since 2014, a nickel-copper mine in Michigan produced a cobalt-bearing nickel concentrate to meet an insignificant portion of the U.S.’ needs.

To this day, the lack of domestic production in the U.S. persists but China now presents increased competition for those exports from cobalt producing nations.

In 2021, approximately 76% of the cobalt used in the United States was imported from other countries. At the same time, China is now the world’s leading consumer of cobalt, according to the USGS, with nearly 80% of its consumption being used by the rechargeable battery industry.

China has been courting Africa and especially the DRC to secure supplies of cobalt and other metals for its battery industry, creating competition for resources, and challenging US supply chains. .

For the time being, the world is dependent on cobalt from the DRC increasing resource competition, and it looks like this pattern is set to persist unless serious efforts are made to mine the material in more established and friendly jurisdictions.

Cobalt is just one metal the U.S. is dependent on. 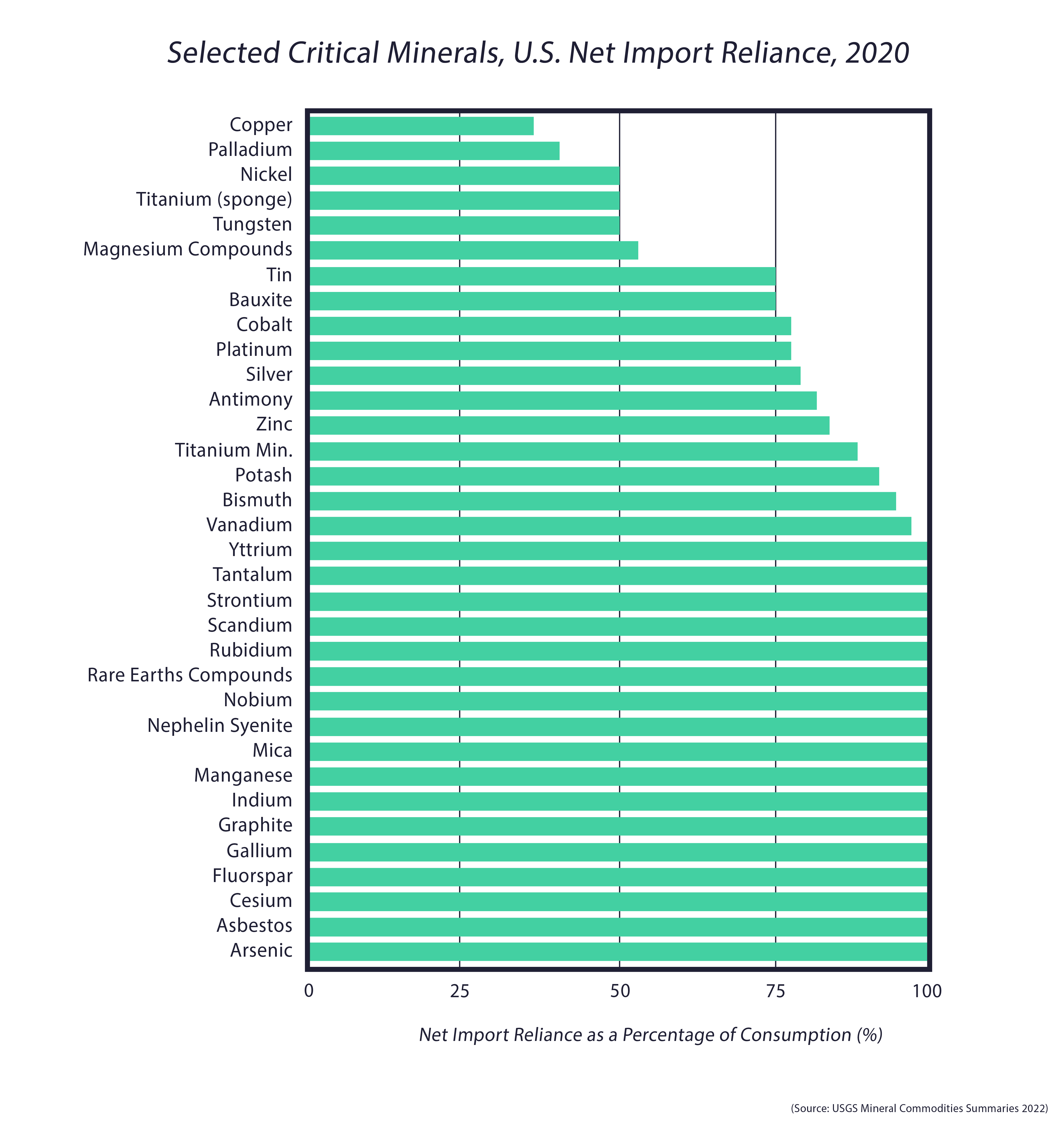 Without these metals, the United States may have to put the brakes on the electric vehicle future until new mines and supply chains are built.  However, grade and tonnage will be determined by nature.

Volkswagen's Chief Technology Officer Thomas Schmall in an interview highlighted its battery ambitions with an investment in US-based QuantumScape.

Chile’s state miner Codelco is in the midst of a 10-year, $40-billion initiative to upgrade its wide network of aging operations, which suffer rom...

Russia is more than oil and gas, it is a major supplier of metals and minerals. What would happen if those supplies were no longer available for sale?