The price of potash and fertilizers were already heading towards multi-year highs but Western sanctions threaten global supplies and prices.

In early February, the price of potash and agricultural fertilizers were already heading towards multi-year highs on the back of an emerging economic recovery, supply constraints, and rising inflation but recently Western governments imposed economic sanctions on a major potash supplier in Belarus, the state-owned Belarus Potash Company (BPC), sending prices higher and threatening global supplies.

Now, with the added conflict in Ukraine and further sanctions, Russian potash and fertilizers may no longer be available for global markets, setting the stage for possible larger price increases, food insecurity and expanded production and bumper profits for non-sanctioned producers.

BPC is the export arm of Belaruskali, the world's second largest potash producer. The U.S. black-listed Belaruskali and added BPC to its sanctions list as the West escalated actions against Belarus President Alexander Lukashenko in light of the country's involvement in the Ukraine conflict.

Uralkali is a Russian potash fertilizer producer and exporter. It is traded on the Moscow Exchange using the symbol, URKA. It supplies products to over 60 countries, with majors markets in Brazil, India, China, Southeast Asia, Russia, USA, and Europe.

This move may force Belarus to sell it potash through Russia, however, it may still not reach global consumers.

According to Bloomberg, on March 4, Russia’s Ministry of Industry and Trade urged Russian fertilizer producers to suspend potash exports in retaliation for Western sanctions. This move potentially threatens supply to Europe and the world.

Sanctions could remove the second and third largest producers of potash from world markets, pushing prices up further. 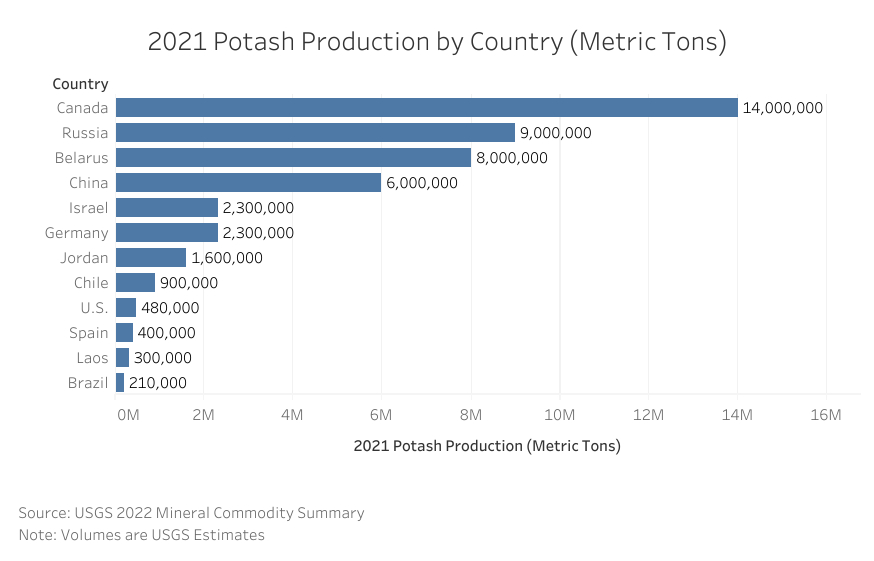 The United Nations’ food price index rose almost 4% to an all-time high in February. Russia is the world’s largest exporter for urea and No. 2 for potash.

In non-sanctioned jurisdictions, it is a mixed message while supply constraints and the elimination of competitors has raised profitability for potash companies, getting enough supply to market will remain an issue.

Brazil, the world’s largest fertilizer importer, was already having trouble getting nutrients for crops. The South American nation is world leader in the export of soybeans, coffee and sugar, so reduced availability of fertilizer and higher costs could worsen food inflation.

This turmoil could push Brazil to expand its fertilizer mining production by pushing into the amazon and accelerate current plans, exacerbating indigenous and environmental issues.

The potential of potash production in the Amazon Basin is similar to the Urals region, in Russia, and Saskatchewan, in Canada, according to the state geological survey of Brazil.

Potash deposits held by Petrobras and Potassio do Brasil, a company controlled by Canada’s Forbes & Manhattan, have a combined 3.2 billion metric tons of resources. Other areas could double that.

Nutrien could sell as much as 14.3 million tonnes of potash this year, its most ever, and Ken Seitz, president of Nutrien, said the company plans to run its plants “flat out” as it braces for exports interruptions and plant closures from Russia.

Shares in Nutrien were trading at $CDN 120.09 on the Toronto Stock Exchange Friday at market close, up ~$CDN 25 since last week, when Russia invaded Ukraine.

Nutrien shares have climbed 55% year-over-year, as global demand for fertilizer already exceeded supply prior to this week's crisis.

This bodes well for fertilizers companies and the prospects of new investment into the industry, but for the average person and farmer it means higher costs, and for the least well off possibly hunger.

“The potash market is on alert due to the Ukraine/Russia war. The concern is with the rise in prices and with the supply of the input. This is a food security issue,” said Marcio Remédio, director of Geology and Mineral Resources at the Geological Survey of Brazil (SGB-CPRM).

Prospector Portal has 30+ potash projects that are in various stages of use, from production to exploration. The data in our database allows you to quickly find the companies that will be the most affected by current events. This week's map has all the potash projects listed on the TSX and TSX Venture exchange.

Take a look for yourself...

A military coup in Guinea briefly threatened one of the world's leading suppliers of aluminum, causing prices to spike.

The price of uranium is melting up to the highest level since 2015 due in part to Sprott's new fund pushing prices to meme-worthy highs.