Mining companies lost interest in tin decades ago because they believed it reached its peak, but a renewable future is changing the metal's prospects.

Nicholas LePan
May 10, 2022
Tin is a metal which most mining companies lost interest in decades ago because they believed it reached its peak. The world no longer needed tin plating or alloys such as lead-heavy pewter, but a renewable future is changing the prospects for the metal.
The secret may be out but tin is having a moment amid a new focus on the supply chains for technology products. Prices for the metal, used as solder in chips made by companies like Taiwan Semiconductor Manufacturing Co. and Intel Corp., hit an all-time high of $51,000 per metric ton in March, up about 150% since the start of 2020
Semiconductor industry sales, tin's largest single usage sector, continue to boom. Global sales were up 32.4% year-on-year in February, according to data from the Semiconductor Industry Association. It was the eleventh consecutive month of growth coming in above 20%.
This is all bringing renewed focus to tin. A few companies had the foresight to see beyond tin cans and tin plating.

A Metal for the Energy Transition

In 2018, Rio Tinto’s Ventures Group funded a study from the Massachusetts Institute of Technology (MIT) to look at new areas to invest in. tin was at the top of their list of metals likely to be affected by new technology. 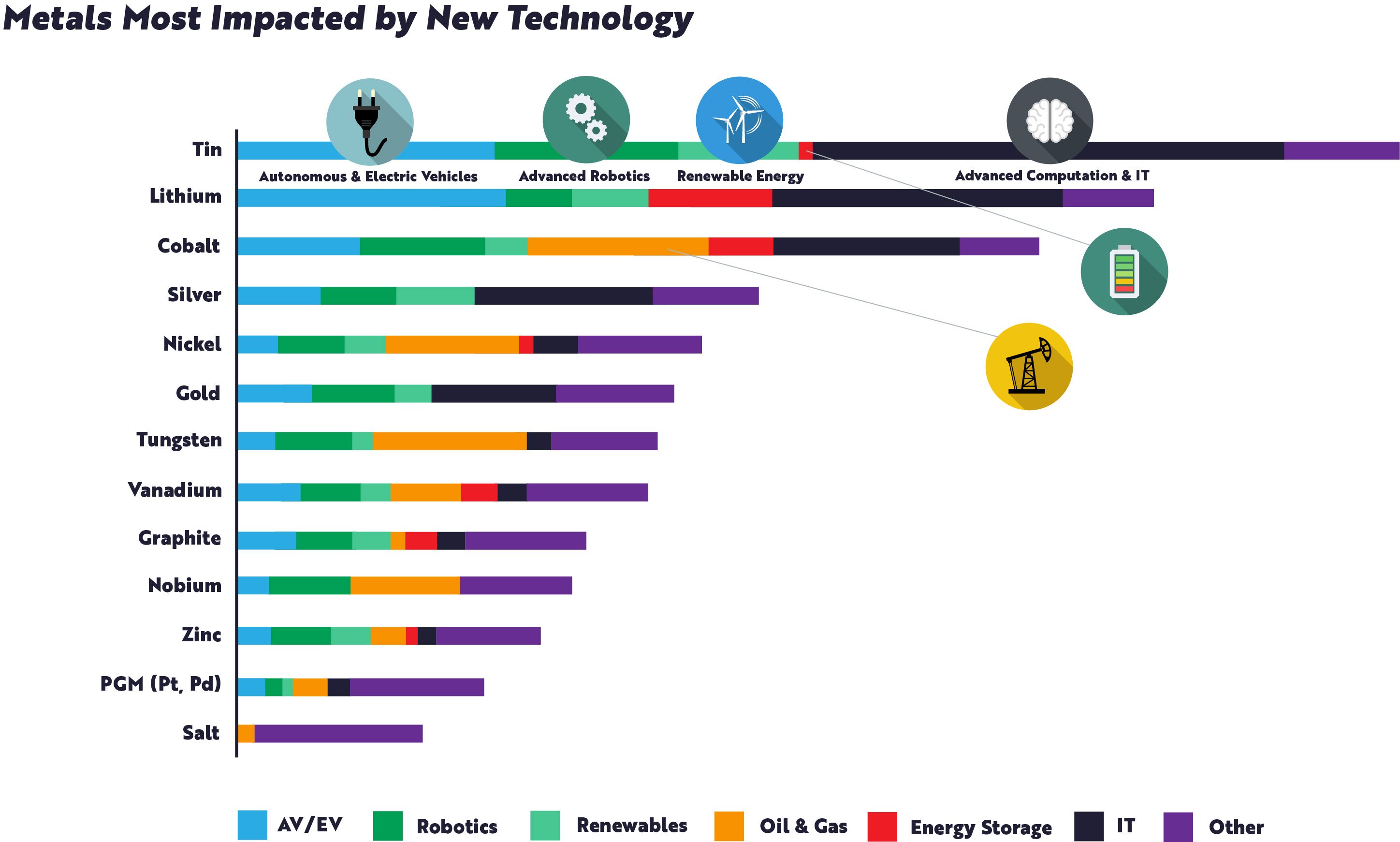 Head of Ventures at Rio Tinto Mr Andrew Latham presented the findings at a lithium and battery materials Conference in 2018.
According to the study, tin is the metal that will be the most impacted by new technology. This is improving the fortunes of the few mining companies exploring and developing tin deposits.
The MIT study outlines their approach by looking at the needs of new technologies and the properties provided by each commodity.
For example, if a new invention or technology needs conductive materials, the study pairs the commodities that have good electrical conductivity.
The commodities are then scored on three metrics:
(1) ease of substitution including dematerialization trends,
(2) likelihood of market disruption due to the technology and
(3) potential size change of commodity demand from the technology compared to the current market size for that commodity.
Tin ranked high in the MIT framework because of the potential for increased demand from electrical and energy storage and because these demand changes might would be massive in comparison to the current market size for the metal.
In the study, other commodities had a larger potential for demand increases, but these commodities already had large markets.

Miners to the Rescue

Tin stocks are struggling to rebuild and prices remain high because demand is still red hot, particularly for tin solders used in computer circuit boards.
One Macquarie analyst is quoted asking the question: “The key question for the latter (fresh supply) however, is where from?”
Despite Rio Tinto’s foresight it has yet to invest in any tin deposits but there are a handful of miners that have deposits that are attracting renewed interest.
Prospector is tracking all the projects listed on the TSX and TSX Venture, take a look at the interactive map below.
Weekly Nugget

Russian Miner Sets Up Physical Fund for Copper and Nickel

Where in the World Are All the Metals?

The Toronto Stock Exchange (TSX) and the TSX Venture Exchange (TSX-V) are home to 43% of the world’s publicly-listed mining companies.

The London Metals Exchange suspended trading of its nickel contract not over concerns in Russia, but because of a bet went wrong.